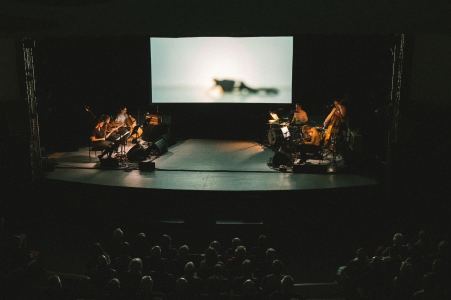 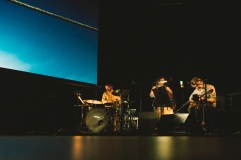 A man whose house was next door to mine came across the moor I think. I don’t know how he had got ashore but it was as if he had lost his mind. And those from the village who had lost their loved ones, the mothers and the wives – they were coming in and asking him if they had seen any sign of Donald or Angus or Iain. But he could only look at them with tears streaming down his cheeks. And I remember he had two words he was repeating often. ‘Good god, good god’. It was as if he had got a hold of these words on board and they had stuck in his mind. And he had no words except these.  (Donald MacPhail)
–

/
Lyrics:
I wish for you the water hold
I wish for you to make it home
Won’t you come home, come home
–
–
Ise I
Iain: guitar, vocals
Pete: cello
Lori: lead vocal,  fiddle
Emma: viola
Gordon: double bass
Joe: drums
/
Lyrics:
I close my eyes and walk before you
The ghosts they talk back in rhymes
I will break this ground
I will break this ground
His light it burns from my inside out
And my hands they turn and break our ground
You know that I try to walk before you
You know how much I will you to return
You know if I could I’d walk beside you
And if only we could stop this now
–
–
Ise II
Iain: guitar, vocals
Emma: viola
Lori: lead vocal, fiddle
Pete: cello
Gordon: double bass
Joe: drums
/
Lyrics:
Be still and I know that you are here
But I’m barely human
We are rock, we are wolves, we dissolve like salt
Be still and know that I am
–
–
Cogadh I
Iain: guitars, voices, drum machine
/
Lyrics:
Take hold, take hold, this water, we know
And the chord
Still binds
And the thought of her home
And the warmth of her hand
Grey black
We are alive
And I wash with this water and salt
Each day I wash with this water and salt
–
–
Cogadh II
Iain: guitar, vocal, bass
Joe: drums
Pete: cello
Emma: viola
Lori: fiddle
Gordon: double bass
/
Lyrics:
War
Drawn lines, drawn lines
I cower like the next man
If you could see inside, see inside
The same coloured blood moving
I’m lunacy, it’s lunacy
I’m controlled by the moon, by the moon
I’m my enemy, I’m my enemy
Tick, tick, tick, tock
Tick, tick, tick
I’m in love, I’m in love
My fingernails dig into my calloused skin
War
Oh how I think of you
In my head, colours colours
I’m howling with the shapeless moon
Oh how I think of you
–
–
Roinn I
Iain: guitar, vocals
Joe: drums
Gordon: double bass
Pete: cello
Emma: viola
Lori: fiddle
/
Lyrics:
Black night, black as tar
White, white sea
–
–
Roinn II
Iain: low whistle, vocals, guitar
Pete: cello
Emma: viola
Lori: fiddle
Joe: drums
Gordon: double bass
Samples of men taken from 1959 radio broadcast
/
Samples:

If this had been during the day I’m sure there would have been frightful panic. But people could not see how terrible the danger was until they went out into it and when they went into it and realised, it was too late because what would they do now to save themselves? It was surprising how little….but it was the darkness. The darkness…. now the sea was terrible and we could not hear a word, we could not hear a word. No. And everyone was leaving and we didn’t know where they were going but you could not stop them. (0.55)

The place went so dark and you could not see anything but white sea. There was a terrible spray coming across her and you could hardly open your eyes. The wind was getting stronger at every turn until eventually you could not be alive in her with the amount of swell passing over her before she went again. (1.51)

I saw two or three getting smashed against the rock, and falling dead into the sea there and then. You know, when you took the slack up when she was listing and then a great swell came you would say the rope would not withstand it, you then had to ease off on the rope. There was plenty opportunity to get on the rope, but when I got onto it, I still remember it, I caught the rope with my left hand and let my other hand down. And when the swell came to me from shore it knocked my head against the side of the ship. I remember that right enough. That sort of knocked me senseless. Apparently the next wave carried me behind a rock. Now that rock nearly dried out when the swell went away from shore. That is how a lot of us were saved; if there were a few men above they would run down when the swell went out and pull up these men, whether they be dead or alive, from the rocks before they got washed away again, and take them to shore. And I felt the sea filling my insides and thought to myself that there was no easier death than this – just as if falling asleep. I have no other recollection until coughing up the seawater on shore. (5.12)

/
Lyrics:
To these great waters and to the high stars
In silence I offer all that we are
The dead and the living our voices will fade
But we must hold each other to the light of this day
And I dance and I dance
I keep in time, keep in time
See the colours of the spring, I can’t open my eyes
Hear the lapping of the water as it plays with this rock
Need to stay here now, until this never goes away
–
–
Roinn III
Iain: vocals, guitars
Joe: drums
Gordon: double bass
Pete: cello
Emma: viola
Lori: fiddle
/
Lyrics:
How did we get to this point Aonghas?
This light is so beautiful, it’s almost making things unreal
Like ghosts and the silence on a Sabbath afternoon
When you can’t hear the background noise no longer, it becomes part of you
But your heart moving and the sea at play
We stop noticing
Those loud days when the white foam hits the outer rocks
When you think if there is a wild god or animal at play too
The strongest and most ghostly animal
Playing with us, alongside us, against us, inside us
This sharp blue piercing my eyes
And that wind like wire ripping
Close up your coat Aonghas, tighten it around you
Let’s find a shelter, away from this
/
Salt, saltwater
Share, share this cup, share
Salt, saltwater
That woman at the table
Break those threads, break those threads
It’s not fate I was born with
This is the ground we walk on
The sea is not death son
If it’s life if it’s able, just ask, give us shelter
Salt, saltwater
–
–
Roinn IV
Iain: guitar, vocals, piano
Joe: drums
Gordon: double bass
Pete: cello
Lori: fiddle
Emma: viola
/
Lyrics:
Come away we’ll go
We give to thee
What if we are all 3 billion years old
That’s why we sparkle like your stone
The sea is his and he made it
And his hands formed this dry land
What if I grow to be 4 billion years old
I would like to sparkle like your stone